Reposted from the Berkeley Energy and Resources Collaborative: http://berc.berkeley.edu/whose-hacks-hacks-takes-fight-environmental-justice-politics-climate-change/

This year Cleanweb Berkeley hosted it’s 5th annual hackathon, entitled ‘Whose Hacks? Our Hacks!’.  With previous awardees having been in information technology for flexible demand and shared solar services (and drought visualizations during the drought), we wanted to challenge participants to explore usually untouched subjects at the intersection of IT + energy and resources: environmental justice and the politics of climate change. The politics of climate change in the U.S. appear unsurmountable, and after a long slow boil, environmental justice has now reached the status of a civil rights emergency. These issues are relevant to the US and elsewhere, and we were excited to see new ideas emerge. 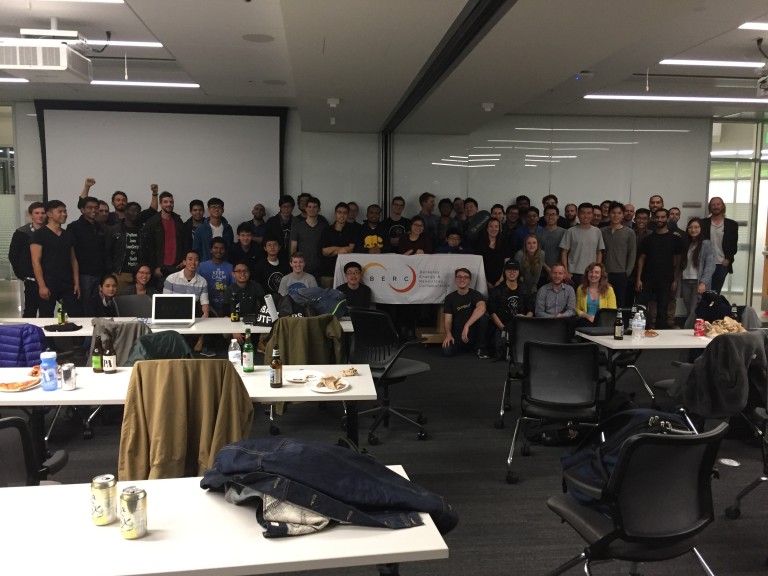 We were ecstatic to see that our community responded! In total, there were 58 attendees and 12 teams, making this the largest Cleanweb Berkeley hackathon to date. The submissions were excellent, including:

Our winners were BERClean a flexible demand app that depicts market prices and marginal emissions so that customers can reduce their costs and emissions, SolarShare an application that connects people who want solar but don’t have real estate with people who have real estate but can’t afford solar, and the third place and people’s choice winner FoodPrint. FoodPrint is a Chrome extension for Instacart that provides users with suggestions with food they could swap from their cart in order to reduce their environmental impact.

While we were disappointed that the judges did not award any prices to the environmental justice & political themes, we were extremely impressed by the quality of everyone’s work. It also begs to question: Is there no space for hacking environmental justice & politics with information technology? Why, even when there is a theme, are strong proposals not recognized? How do we organize events and ourselves to recognize the importance of these proposals and solutions?We thank everyone for participating and look forward to seeing how many of these projects will undoubtedly flourish!