I had heard rumors of hidden gems and treasures, along the Lost Coast. Soon, I was turning 33, and for some reason that’s immediately where my mind went. I’m not sure what it was. October always has great surf, the solitude of the place, adventure and remoteness, who knows. The data and a few, old,  Lost Coast blogs around the internet all suggested that the stars were aligning  exactly that weekend. I did some research and sent a blast to friends who I thought would be game for an adventure. The weather was perfect and the tide tables suggested that we would traverse the usually impassable high-tide routes without any problem, with plenty of daylight and good weather. As luck would have it, everyone was either tied up with life, far away, or simply just not up for the drudgery. I second guessed my decision. What if I get stuck at high-tide? What if I get eaten by a shark? What if a rattlesnake bites me? Is it a good idea to go to the Lost Coast alone? But, the way I live life has always been the same. An Ok sense of the general direction, carefree enough to not know the exact way, but prepared (and lucky!) enough to find it. So, I packed the van, max-filled my bag with pears from the tree (I have many many, you should have some too), bought a map and tide tables, and left. 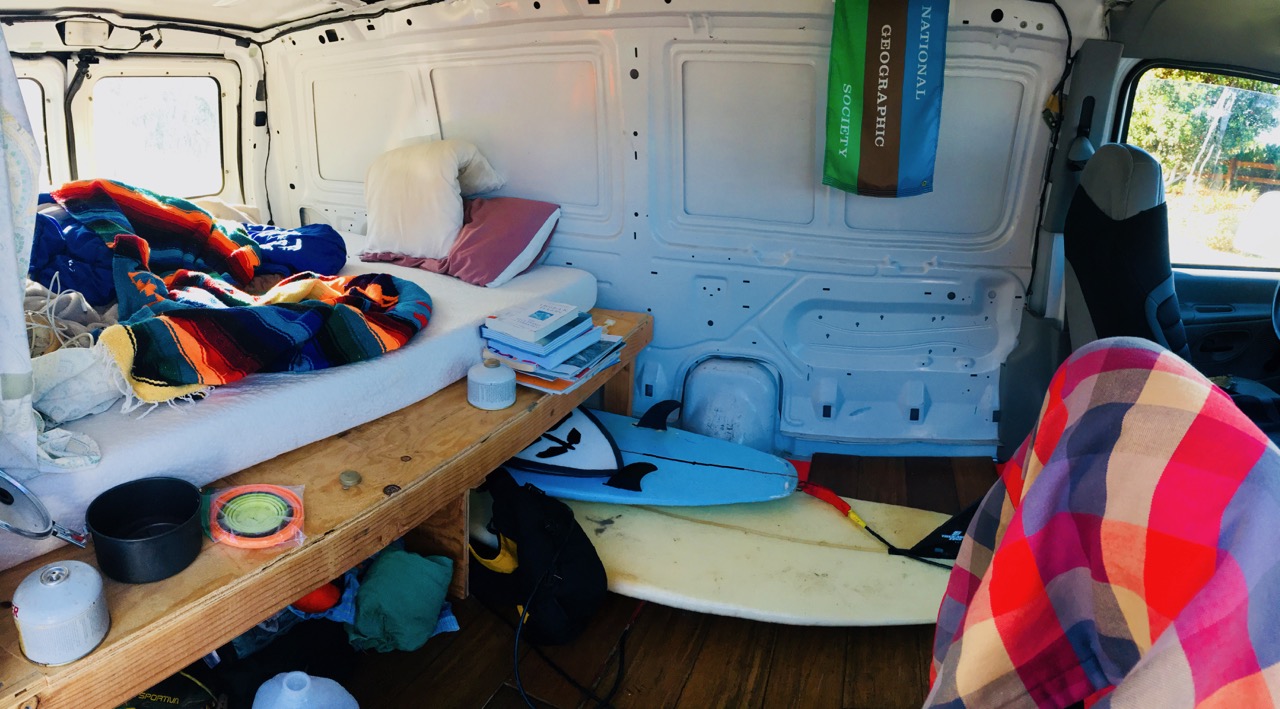 Pears and oatmeal, breakfast of champions.

The beginning of the Black Sands trail

I woke up in the wee hours in the Bay, and 5 hours later, I found myself in Shelter Cove. I could see tempting rolling waves just below the lighthouse, as well as rocks jagging off the whitewater, but no surfers.  Still, I went on. I parked the car at Black Sands trail-head and hiked all day until a little past sunset on a reconnoissance  mission for waves and surfers. One could easily tell that several patches of reef and rock could hold long rides, and there was consistent surf, but still, no surfers. I was in shock that the locals wouldn’t be out here riding. Little did I know. So I walked, for many hours, carefully looking at my watch to make sure that I would not get caught on a rising tide, or a sneaker wave, through one of the Lost Coast’s impassable tracks. After several hours, slowly in the distance, I saw a tiny shiny diamond blobbing it’s way towards me, it’s tip reflecting the promise of an undiscovered gem. I stopped to snap a few pics of the fellow traveler (let’s call him Nehru, because of his disposition for freedom as well as cordial negotiation), and as he approached, I showed him his pics and we bantered for a bit. I told him I had brought my boards, but had no idea where I was doing or going. Nehru was full of stoke, and told me he had caught the waves of his life that morning. The tide, moon, wind, and swell had all aligned. 5-6 ft barrels had been whispering sweet nothings to him all morning. He then asked me for my map and told me where to strike the next day, ‘… Don’t even dare bringing your camera down there..’, he said, ‘…absolutely no pictures…’. So, after exchanging numbers and e-mails we both went our ways, him back to his home (he had run out of food), and I, a few more hours to see if I could catch a glimpse of DGems. I walked much further, but I didn’t want to risk being left in the dark, so went back. That night I drove up the mountains to find the Granma Expedition Trail (GET). It was several hours off the beaten path where I thought the van would die on me, and after several wrong turns, that I arrived to the beginning of what I thought was the GET (it totally wasn’t). I parked the van under a clear starlight sky, and slept,  a little bit nervous but excited (there are ‘Keep Out’ gates all over the forest, taking care of the ‘greenery’, you know what I mean).

You don’t want to get caught here by a rising tide or sneaker wave. 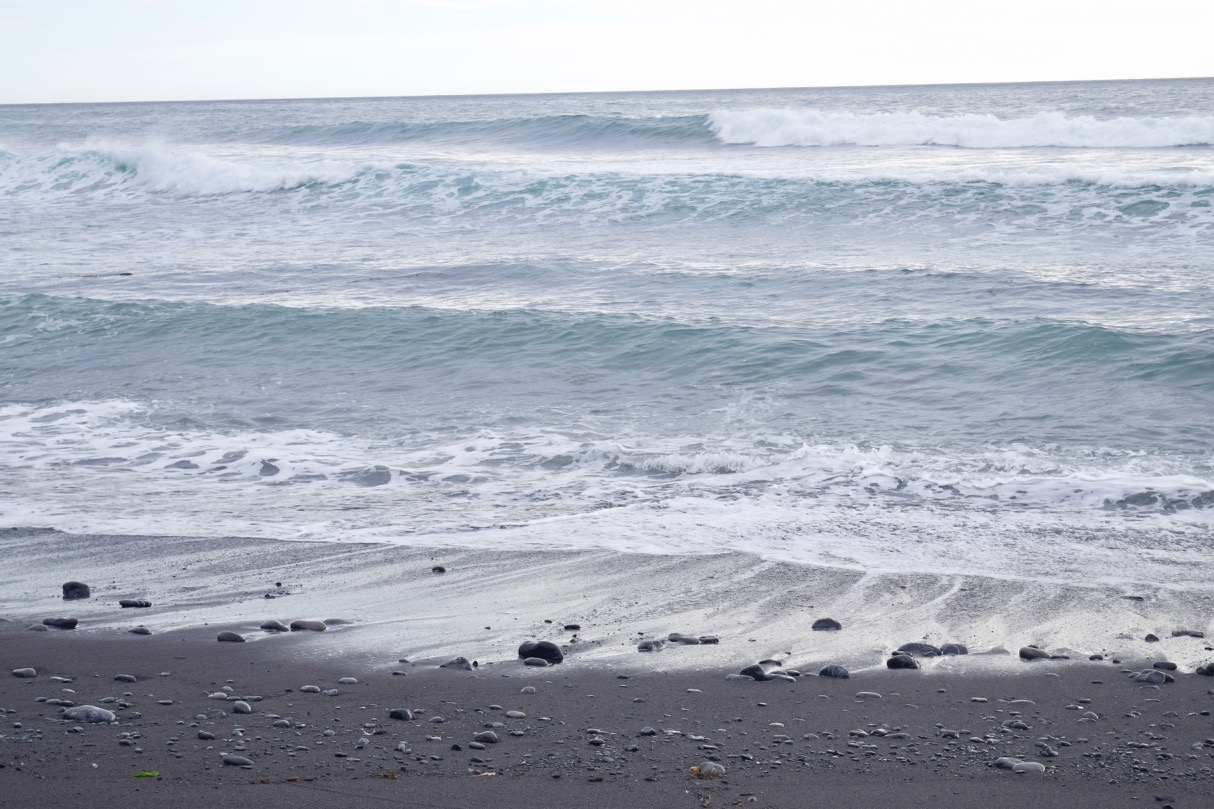 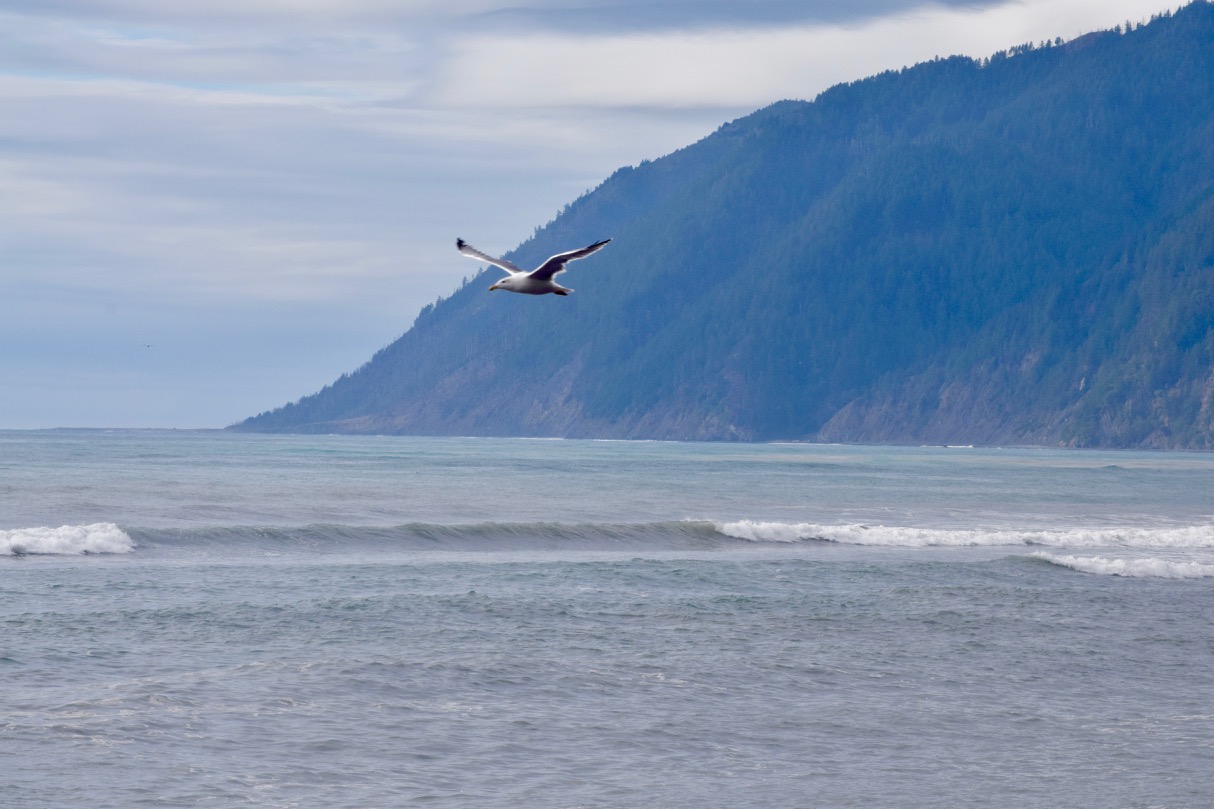 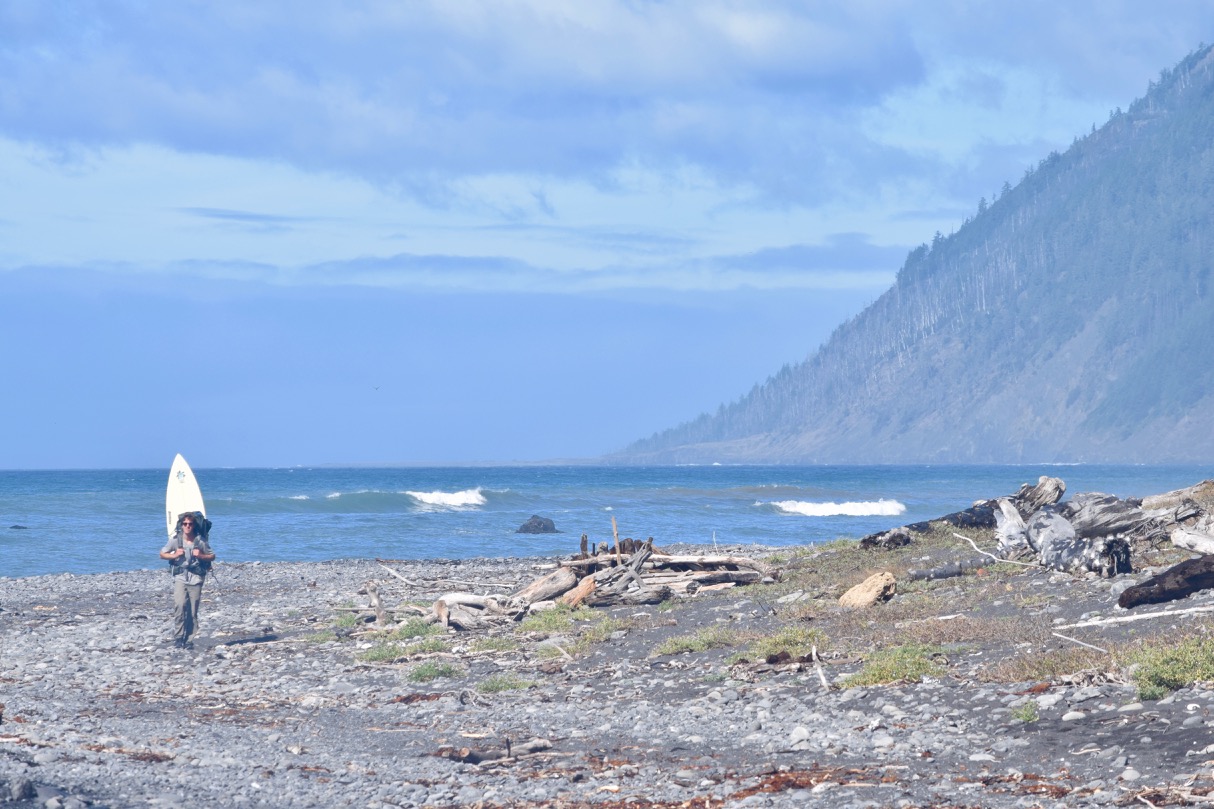 I woke up once again in the wee hours. I had many hours of walking ahead of me in a poorly marked trail and made my way to the ocean. For hours I thought I was lost and made sure to carefully retrace my steps when I was 100% sure I had no idea where I was going. Truly, I had no idea where I was. Today I had only packed my bag with enough water and food for the day, my wetsuit, and my board. No camera or cellphone, no tent in case I got terribly lost, no extra snacks, I had to make it there on time to not miss the spell, and tried to not get terribly lost. After several hours I began hearing the distinct sound of the Pacific, roaring as I made my final steps towards it, I heard the words of my good old friend ZenThai – ‘you have arrived’. Suddenly, I was with Northern California surfers, locals mainly. In their cool cold cockiness they said hi with a shrug, and welcomed me into the water, realizing that I had a massive smile despite having just grinded my way through the woods to take a peek at their gem; and so, I surfed the best and wildest session I’ve had in California. The stars had aligned, and it dawned on me that this was the reason I had to be here alone. With a group of friends, or only one more person, Nehru would have not shared the path.  Once in the water, I knew I had to spend enough time to savor the moment, immortalizing the moment for a few hours before its  memory would inevitably fade … but not too long either, I didn’t want to get lost on the Granma. I remember blobbing around in the water, watching and reading before taking on my first wave. It felt so incredibly remote and wild, yet familiar, thanks to all the dudes also blobbing around next to me. There was none of the man-child surf attitude that you see often in the Bay area breaks (all over the world, really), instead, surfers were quietly picking and ripping their waves. The views were like monuments, and the waves, peeling. The wetsuit on my backpack dripped with heavy salt as I hauled my sunstroked self back up the Granma. I made it back to the van, beat. 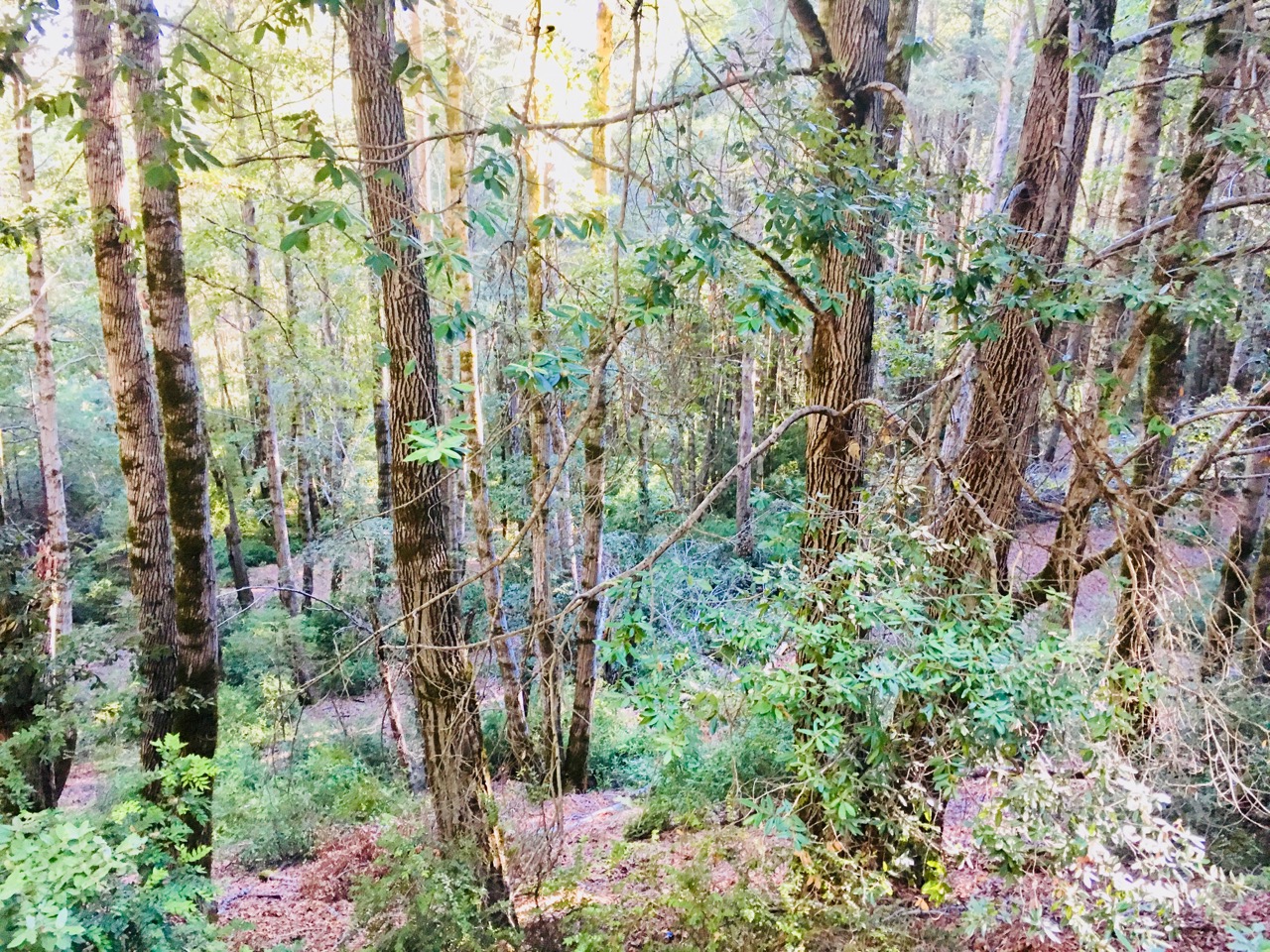 The only picture of the day. The Granma Expedition Trail. Location: Anywhere.

As I laid down that night, and revisited all the day’s images in my head, I began planning the next day. Should I hike again or see the rest of the coast? Greed wanted more waves, but my legs were so spent, that even the promise of more gems made me decide to make my way to Mathole. So, I checked the tide tables and woke up early the next day to make my way up to go as a far as I could to complete the second portion of the trail. Conditions had changed, as howling winds blew sand, and little pebbles in every direction as I began walking. Still, I tied my board to my bag and walked for hours, Justin Case I would get lucky once again and find a sheltered cove, Nehru, or one his diplomats. But, as I said, conditions had changed, the star alignment had moved forth, taking the wind of opportunity with them. So I walked for hours with the surfboard playing the role of a sail, swinging me in every direction until it was time to walk back. During most of the hike the wind had been against my back, so making my way back was a battle of pushing against the wind, sand blasting me as I pushed onwards. It took me forever. I would often have to either crawl down on the floor throughout sea-side sections or take several minute long breaks. I somehow thought I deserved the beatdown. On the path, I saw one large Fisher, a small rattle snake, and a larger coiled one, resting. I kneeled quietly for a little bit (like 5 seconds) and stared – quietly terrified – at the sleeping snake, I had never seen one so close, so pretty. I was beat, once again, but felt rewarded with having completed a full adventure. 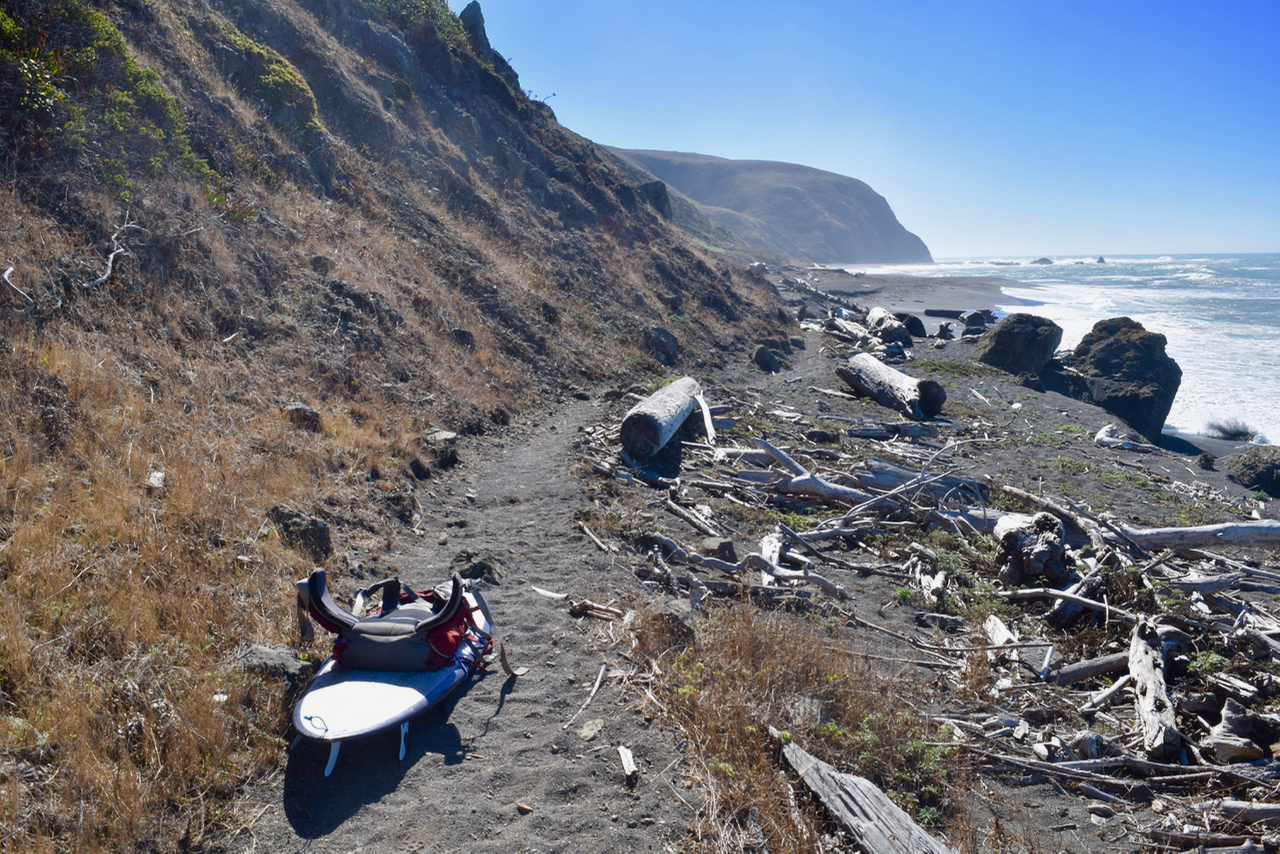 It’s funny. In life, in many ways, the timing is almost always odd, and never right – for anything. When life feels wonderful, some of its sunshine is unexpectedly taken from us. When we’re suffering, beauty emerges from equally unexpected places. It’s just how it is. We live in a world that is so busy that we forget to pause, specially living in the Bay. People are so incredibly busy, always rushing. Some settle for cold comfort, others endlessly dream of the great big future. Most, accumulate things. All of us, tied to external pressures and schedules. It’s rough at times. Importantly, this trip allowed me the time to sit. One of the best parts from the trip came during the first day, when I sat quietly on a rock for a long time, and allowed thoughts, mundane, joyful and painful, to come and go, and I just watched them, like cresting and passing waves. I loved all of them. This was the best part of the trip, realizing the impossible strength of a sitting rock. I got lucky this time, but it was a great reminder that when the stars align, or when you think they might align – you must always pack your bags – and go. 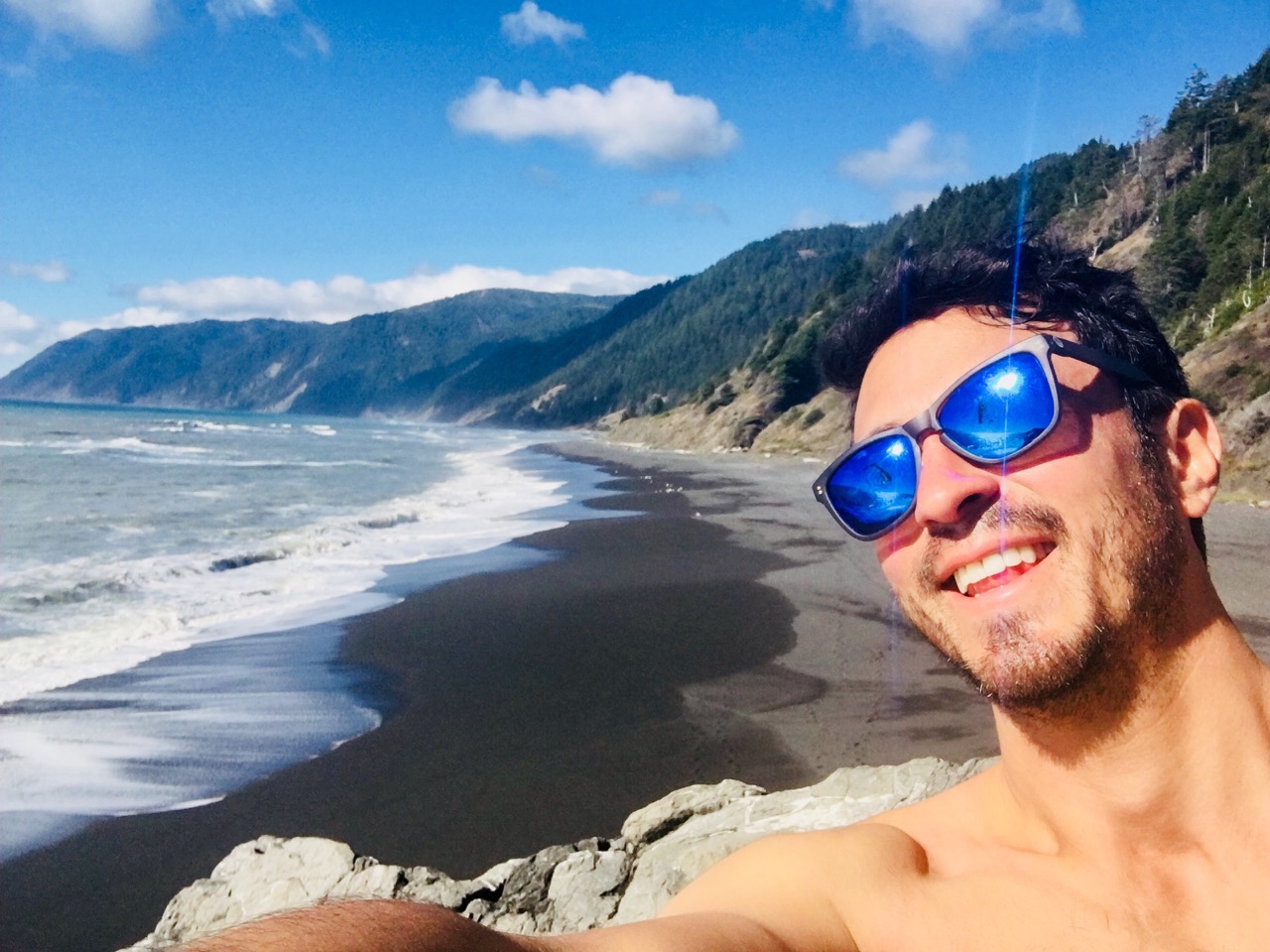 On the Sitting Rock.