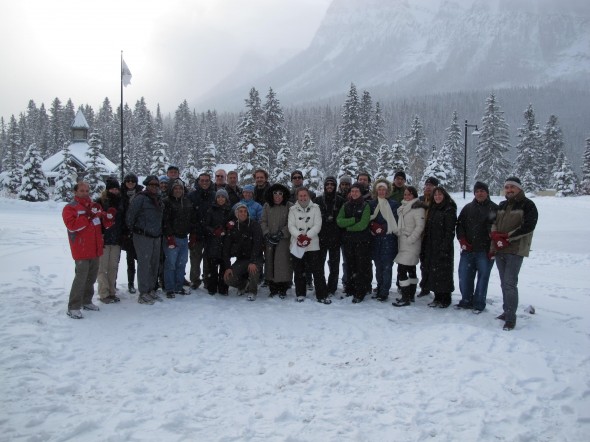 The twenty 2012-2013 Fulbright NEXUS Fellows and the management team from the Institute of the International Education and from the U. S. State Department along with Lead Scholar Professor Dan Kammen and his program assistant, Diego Ponce de Leon Barido at Lake Louise, Alberta. (Photo by Daniel Kammen)

The Americas are undergoing a transition in the energy sector that will have global geopolitical ramifications. At the same time as the United States is touted to become the world’s largest oil producer by 2020, and a net exporter by 2030, Brazil, Nicaragua, and Panama show the most promise in becoming regional hubs not only for clean energy investment, but for sustained low-carbon economic growth (see related story: “U.S. to Overtake Saudi Arabia, Russia as World’s Top Energy Producer“).Although Latin America and the Caribbean lag behind the United States and Canada in terms of implemented clean energy policy and project funding, 7 percent of the region’s total installed capacity today is renewables, and it is expected to grow faster in years to come. (See related interactive map: “The Global Electricity Mix“) Faced with ever-changing economic and political realities, regional collaborations for knowledge-creation and -sharing are crucial for fostering lasting partnerships that can make ‘sustainability science’, well, sustainable.

International partnerships that lead to concrete action are often the clearest signs of innovation. At the state to state level, the Energy and Climate Partnership for the Americas (ECPA) and at the person-to-person level, the Fulbright NEXUS program provide clear evidence regional collaborations that are clearly changing the modes of engagement within the hemisphere. One of us just returned from a partnership-building ECPA sponsored trip to Nicaragua, facilitated by both the U. S. Embassy team and a local NGO, blueEnergy, which is discussed below and here, focused on community energy. Just two years after its launch by President Obama in 2009, ECPA has moved beyond its initial focus on knowledge sharing around cleaner and more efficient energy, and now also supports sustainable forest and land use initiatives as well as climate change adaptation strategies. Governments and institutions such as the Organization of American States (OAS), the World Bank, and the Inter-American Development Bank (IDB), have all worked together to support regional technical workshops, business strategies, and other initiatives for new and cleaner ways to provide energy. ECPA has also become a vehicle for leaders in sustainability research and practice to work at the institutional level to link industry, university, and civil-society groups in the New World.

The two-year-old Fulbright NEXUS program has already become a regional model for the support of scholars from around the hemisphere committed to applied research and collaboration on sustainability science. At a recent meeting in Banff, Canada, the 20 NEXUS fellows focused equally on individual and group projects to assess and address environmental issues plaguing the Western Hemisphere. Interestingly, the focus was on solutions science, not just in quantifying the extent of environmental change. During the coming year, the Fulbright NEXUS Fellows will be working across the region on projects ranging from forest health and productivity in Alberta, Canada, to local perceptions and strategies for climate change adaptation in the High Andes of Peru, to understanding the interactions between climate mitigation and adaptation strategies for Brazil’s power sector.

As a group, however, this class of Fulbright NEXUS fellows have embraced the challenge of mixing their individual research projects with a series of novel team efforts designed to build lasting partnerships. The first is an effort to link and map the measurable impacts that climate change is having on a variety of ecosystems (reefs in Belize, glaciers in Peru and Bolivia, forests in Canada, and deserts in Utah) and tell the story of communities that depend on the health of these systems for their survival. The second, a group comprised of researchers from Argentina, Brazil, Colombia, and the United States, is working with blueEnergy, an NGO in the Caribbean Coast of Nicaragua, to understand the regional implications for land use, water, and energy, under a variety of agricultural growth scenarios.

With the remarkable rise and relevance of ICTs in development, our third group will focus on the opportunities that exist for these technologies in areas such as early warning disaster systems, pollution monitoring, and agricultural management in Chile, Colombia, Jamaica, Mexico, and Uruguay. The fourth is a study linking national funding available for applied environmental problem solving research, environmental degradation, and economic growth. Although recent initiatives such as the USAID-National Science Foundation PEER program, the Inter-American Institute for Global Change Research, and the recently proposed creation of a South American Council for Science, Technology, and Innovation, have begun encouraging regional collaboration and partnerships, there is still a great need to support and fund ‘use-inspired, basic research’ initiatives that build on scholarly advances with a strong eye for the on-the ground impacts. These collaborations will be facilitated through bi-weekly conference calls and work products managed on shared web sites and web-based data sets.

In April 2013 the group will hold another integrative meeting in Medellin, Colombia, where our fellows will present advances in their individual and group research projects to stakeholders, and our final meeting in Washington D.C, will give us the opportunity to meet members of the U.S Government with whom we will discuss strategies for continuing this dialogue across The Americas. It is true that we are entering a new economic, environmental, and political reality, but through collaboration, there is no doubt that we will make of the future, a much less uncertain one.