“Long term travel isn’t an act of rebellion against society, it’s an act of common sense within society. Long term travel doesn’t require a massive bundle of cash. It only requires that we walk through the world in a more deliberate way. This deliberate way of walking through the world  has always been intrinsic to a time honored quietly available tradition known as vagabonding. Vagabonding involves taking an extended time out from your normal life, to travel the world on your own terms, but beyond travel, vagabonding  is an outlook on life, vagabonding is about using the prosperity and possibility of the Information Age to increase your personal options instead of your personal possessions. Vagabonding is about looking for adventure in normal life, and normal life within adventure, vagabonding is an attitude, a friendly interest in people, places and things that make a person an explorer in the truest most vivid sense of the word . Vagabonding is not a lifestyle, nor is it a trend, it’s just an uncommon way of looking at life. A value adjustment from which action naturally follows, and as much aa anything, vagabonding is about time, our only real commodity and how we choose to use it.”

“Afterwards we had played table football in a bar – Manu won and, oddly, apologized sincerely. Then he started telling me what he said was the “genesis myth” behind the creation of Clandestino. The key to the record. It was, he warned, a long story, about Cancodrillo – a mix of crocodile and dog – and a god called Superchango There’s this little dog called Pepiño who comes from Galicia in Spain and at that time there’s no food, only misery. The cure is emigration. So the dog emigrates to Venezuela and the only thing he takes with him are these seeds of pimientos, like peppers. This dog is so awful that everyone laughs at him. He’s like a cross between a mongrel dog and Charlie Chaplin. Anyway, he gets to Venezuela and everyone laughs and laughs and laughs. Everybody except this one girl, a crocodile black woman. She can’t talk, she’s mute, she doesn’t laugh. They fall in love, get married and go to the countryside. They plant the little pimiento seeds from Galicia and one of the seeds grows into their son, a mixture of European dog and crocodile … a mestizo Cancodrillo!

When he comes out of the belly of his mother, the first thing Cancodrillo sees is the face of this father and, like everybody else, he starts laughing, laughing, laughing, crying, crying. But the cry is a good cry, and the more he sees his father, the more he cries, and the more he laughs, the more he gets rich. He becomes an asshole. He builds a factory after factory selling pimientos. He becomes a big businessman. Very quickly he understands that it is better to do your business during the night, and he becomes like a Mafia man. The more money he makes, the more he cries, and the more he laughs, the more he makes money. He turns all the people from the countryside who belong to his mother’s race into slaves working for him. Cancodrillo lacks new challenges and he always wants more. First he buys the army, then he buys all the politicians. He has everything and he wants more and more. The one day he goes into a bar in the middle of the night, a bar for the Mafia, and he meets this guy. Now everybody is scared of this guy because when he laughs, he opens his mouth and you can see his crocodile teeth. He is the first person ever to stand up to Cancodrillo. This guy is Superchango and he is a god from Nigeria, born as a slave. He laughs at Cancodrillo. He’s not scared of him. They fight, they get drunk, fight again, get drunk. Nobody wins. Cancodrillo is a businessman. Superchango is a god. At six in the morning, they’re still in the bar and Cancodrillo says, Now there’s going to be a real battle, a real challenge! You see this little table football … We’re going to play this game. And if I win, you are going to give me your powers of a god. And if you win, I’ll give you all my business” . Ok. They play table football for ten centuries and nobody wins, or, rather, nobody knows who won and who lost, but after the battle Cancodrillo isn’t a businessman anymore and has become a god, and Superchango isn’t a god anymore and has become a businessman. Their roles have changed and both of them become very sad. They don’t laugh anymore. They get lost. They lose the treasure. And the only thing about this sadness is that they become friends. They decide to travel all around the world to find love and laughter. They experience drugs an go to Patagonia. France. New York. Mexico. They go everywhere.” 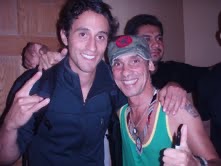 The Possible EGO: In neuroscience, the default mode network (DMN), also default network, or default state network, is a large-scale brain network primarily composed of the medial prefrontal cortex, posterior cingulate cortex/precuneus and angular gyrus. It is best known for being active when a person is not focused on the outside world and the brain is at wakeful rest, such as during daydreaming and mind-wandering. It can also be active during detailed thoughts related to external task performance. Other times that the DMN is active include when the individual is thinking about others, thinking about themselves, remembering the past, and planning for the future. 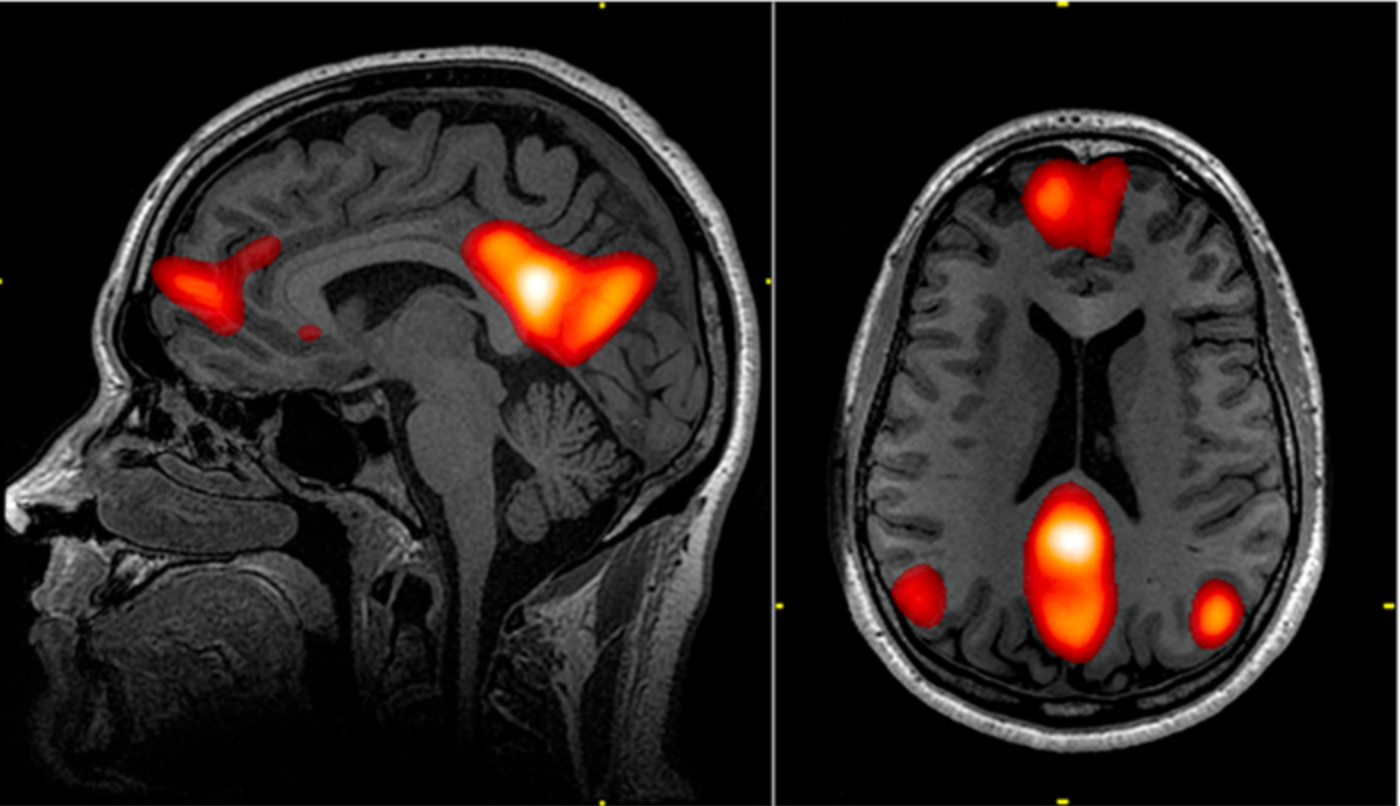 “I woke up as the sun was reddening and that was the one distinct moment in my life, the strangest moment of all, when I didn’t know who I was, I was far away from home, haunted and tired with travel, in a cheap hotel room I had never seen, hearing the hiss of steam outside and the creek of the old wood of the hotel and footsteps upstairs and all the sad sounds and I looked at the cracked high ceiling and I didn’t really know who I was for about 15 strange seconds. I wasn’t scared, I was just someone else, some stranger, and my whole life was a haunted life, the life of a ghost. I was halfway across America at the dividing line between the east of my youth and the west of my future and maybe that’s what happened right there and then, during the strange red afternoon.”

The Struggle for Existence: In a petri dish Georgii Gause dripped five Paramecium caudatum or Stylonychia mytilus, single celled protozoans, on petri dishes with oatmeal. At the beginning the number of protozoans grows slowly, and the graph line slowly ascends to the right. But then the line hits an inflection point, and suddenly rockets upward — a frenzy of growth. The mad rise continues until the organism begins to run out of food, at which time there is a second inflection point, and the growth levels off again as protozoa begin to die. Eventually the line descends and the population falls towards zero. Populations grow at a terrific rate; they take over large areas, engulfing their environment as if no force opposed them. Then they hit a barrier. They drown in their own wasters. They starve from lack of food. Something figures out how to eat them. 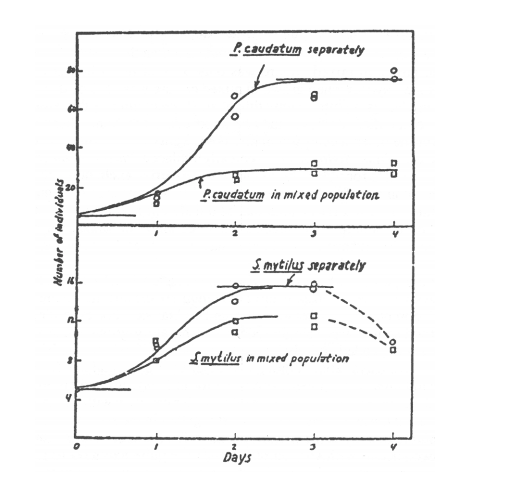 “Every true love and friendship is a story of unexpected transformation. If we are the same person before and after we loved, that means we haven’t loved enough.”

“Thou shalt tear out the teeth of the dragon and trample the lions underfoot, thus saith the Lord.”

“You think of all the traveled lands,
the images and tattered strands
of all the women you could not hold

And suddenly you realize: there’s nothing else
You rise to your feet, and before you appear
the fear and form and empty prayer
of the absence of another year.”

“If there is something you can do,
Or dream you can, begin it.
Boldness has genius, power, and magic in it.”

“The key to resilience is trying really hard, then stopping, recovering, and then trying again. This conclusion is based on biology. Homeostasis is a fundamental biological concept describing the ability of the brain to continuously restore and sustain well being”